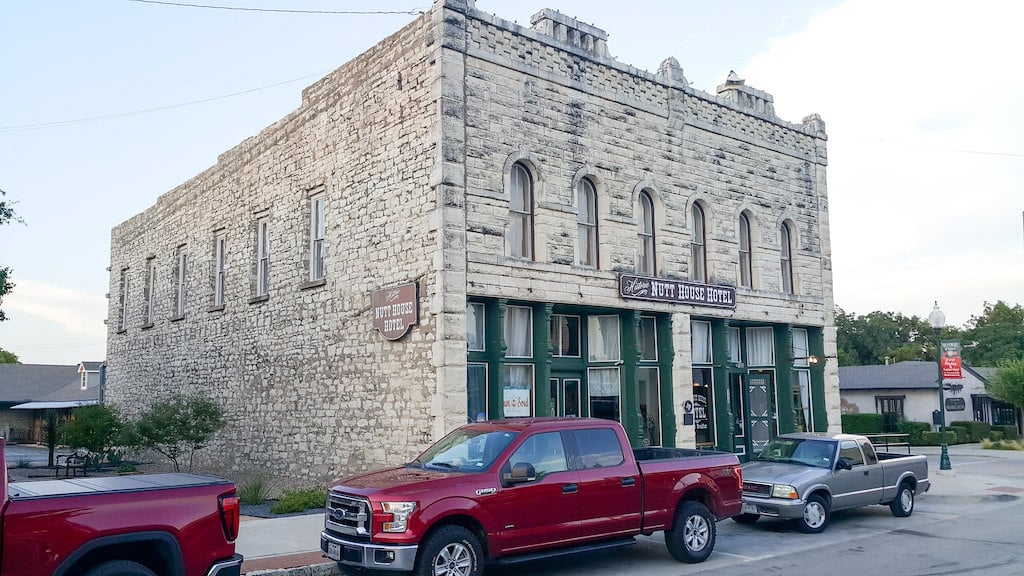 The Nutt House Hotel is an irreplaceable piece of Granbury’s history.

It is truly unique, and is one of the most historic elements of Granbury Square.

The Nut House Hotel is in a prime location and offers access to many of Granbury’s best restaurants, and is also only a short distance away from Lake Granbury.

The Nutt House Hotel is a beloved tradition for many Granbury residents and visitors who have made memories inside the historic building.

It truly offers a sense of warmth and character which is unmatched by other hotels in Granbury.

Note: The Nutt House Hotel is currently being renovated, and is not open for business at this time.

Before renovations began, the Nutt Hotel offered a series of seven suites with en-suite bathrooms.

Each suite was named after a notable figure of local history, and each was decorated in a tasteful manner which reflected the site’s historical past.

The Nutt House Hotel has a long and fascinating history!

The current Nutt House Hotel building sits on the site of the Nutt brothers’ original mercantile store, which began operating in 1874.

The Nutt brothers, who were blind from childhood, began their operation from humble beginnings.

The brothers originally operated their mercantile business out of a tent, and later from a log building, before upgrading to the beautiful limestone building which stands today.

In 1879 David and Sudie Nutt built a home several blocks away from the Nutt mercantile store.

They used their personal home as an informal hotel to host businessmen who visited Granbury.

Their unofficial bed and breakfast continued for many years until they decided to formalize the hotel operation and relocate it to the second floor of the mercantile building.

The current building was built in 1893, as a joint effort from the three Nutt brothers, Jacob, Jesse and David Lee Nutt.

The Nutt House Hotel began operating as a hotel in 1910. In its early days it operated on the second floor of the building, above the mercantile operation.

The hotel was luxurious for its time. It featured ten suites, and had two communal bathrooms, which were considered to be opulent and spa-like at the time.

There were other trappings of luxury, as well, including a guest sitting room, a grand staircase, and other features.

The Nutt House Hotel, as seen today, was built out of native Texas limestone. The warm, beautiful limestone rock material is local to the area.

The Nutt House Hotel is designated as a historical Texas landmark.

A commemorative plaque outside the hotel describes the building’s historical significance. It reads:

Erected for Jesse and Jacob Nutt, blind brothers who aided in establishing [the] county seat at Granbury.

This structure of hand-hewn Hood County stone was built in 1893 by local contractor Jim Warren.

About 1919 Nutt Hotel — famed for [the] dining room — moved in after “Grocery” was remodeled.

Building has been occupied by 3 generations of the Nutt family.

For much of its long history, the Nutt House was famous for its home-style restaurant.

Mary Lou ran a thriving restaurant operation out of the building. She, and her restaurant, were staples of the community.

A commemorative statue of Mary Lou Watkins sits near the Nutt House Hotel on the Granbury Square, showing Mary Lou with a dinner bell.

According to many accounts and legends, the spirit of Mary Lou Watkins continues to live in the Nutt House hotel, and can often be seen, felt and experienced as a spirit, or ghost.

Mary Lou allegedly appears throughout the building, and still wears her traditional dress which was common for her time.

Her spirit is said to open and close the building’s shutters, operate faucets and slam doors.

One room, known as the Mary Lou Watkins room, is said to be an especially active spot for her spirit.

The room is said to have dramatic temperature fluctuations and several other inexplicable phenomena.

Other areas of the hotel are also hot-spots for paranormal activity, and experience various forms of unusual phenomena.

Another room, room 5, is said to be haunted by the spirit of a young girl named Sally, whose footsteps are commonly heard.

Sally’s footsteps have even been captured by video recordings.

The Nutt House Hotel is a priceless relic of Granbury’s history, and that of the surrounding region.

Its warm, elegant beauty has stood the test of time, and will surely continue to do so as Granbury continues to grow.